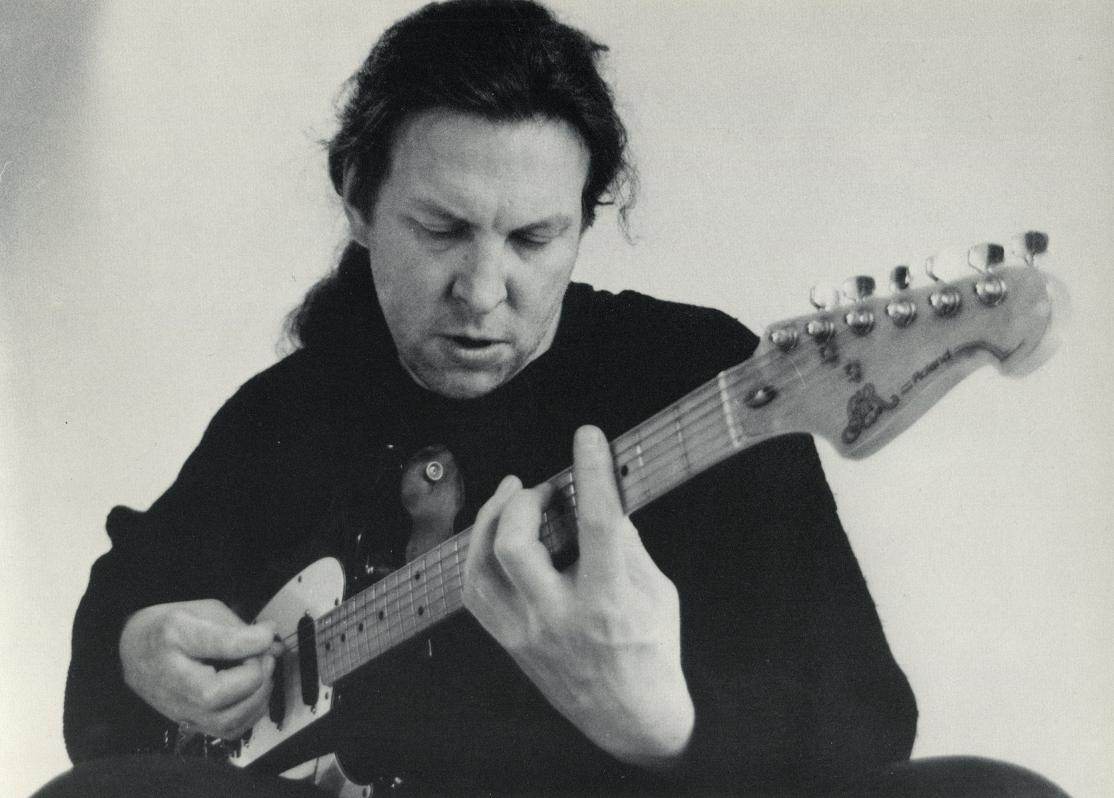 Guitarist/composer Phil Miller was a leading light of the exploratory music style which came to be known as the Canterbury Scene. He played with drummer Pip Pyle in numerous bands including Delivery, Hatfield and the North, National Health and In Cahoots. During this period Phil developed from a distinctive, musically fearless jazz-rock guitarist into an accomplished composer and bandleader, showing none of the megalomaniac tendencies associated with the latter role. He died on 18th October 2017, and is survived by his wife of 40 years Herm and his sister Jane.

My musical journey with Phil was long, eventful and rewarding. It got off to a slightly bumpy start - when I auditioned for Hatfield and the North in January 1973 Pip impulsively offered me the gig on the spot, but Phil sensibly wanted time to consider. The two of them went off into the kitchen and had a heated sotto voce debate, leaving me and bass player / vocalist Richard Sinclair foolishly grinning at each other.

With hindsight, Phil and Pip's disagreements were to be expected; they were like family, having been friends and attended the same nursery school from an early age. With typical honesty, Phil later remarked, "I didn't really know Pip well then, but you don't know anybody that well when you're only four." I like to think that the inevitable loud arguments started by a four-year old Pip (a frightening thought) would have been quelled by Phil's superior height and powers of sarcasm, but sadly no video footage of these squabbles exists.

Prior to joining Hatfield I'd seen Phil play with Matching Mole at Kingston Poly in March 1972. Much of the jazzy improvising went over my head, but I was impressed by the chiming guitar figures in Phil’s composition 'Part of the Dance', and also by its unusual structure, which seemed to consist of a repeated series of building waves which climaxed each time in a triumphant, descending major-scale figure (sorry, bit of musicology there). Soon after joining Hatfield, I asked Phil if we could include the tune in our set list, and after a bit of cajoling, he graciously agreed. I loved playing over that chiming guitar sequence.

It's fair to say that Phil's soloing was an acquired taste - it had to be: nobody else played guitar like that, and in any field of music, it takes time to come to terms with a genuinely original style. On early Hatfield gigs I had my head down trying to remember the material, but gradually Phil's serpentine lead lines began to seep into my consciousness. When we played at The Roundhouse in February 1973, Fred Frith (guitarist of Henry Cow) pointed out Phil's remarkable solo on 'Lything and Gracing', a fantastic, unbroken line of chromatic intervals, melodic leaps and bent notes, all played with his trademark liquid fuzz tone, which spiralled up into the big room's echoing rafters. From that moment, I began to recognise Phil as a special musician.

He was a fearsome improviser: having carved out a piece of musical territory and marked it as his own, he would investigate all of its abstruse harmonic possibilities like a man cataloguing life forms on an alien planet. Guitarist Allan Holdsworth, another deep musical thinker, once said to me he never thought a note could be 'wrong' - it was merely a question of how to make it work in a musical context. Phil championed that philosophy; he was forever in search of the next mad note he could work into a solo, and the effort of that intense melodic invention was written all over his face. Pip used to rib Phil about his on-stage 'gurning' face-pulling, which was as much a part of his unique style as his exploratory, utterly unpredictable soloing.

Phil blossomed as a composer and player over the time I worked with him, and when Alan Gowen and I formed National Health in 1975, Phil's name was first on my team sheet. Though our heavily written charts sometimes impinged on his musical freedom, he gave the band unwavering commitment and stuck with it through numerous difficulties and personnel changes. When I finally left in 1978, Phil stayed on and led the band through US and European tours - he was not a quitter, but was one of the most steadfast, reliable and loyal people I have met.

Held in affection by his bandmates, Phil was a great friend to Barbara and myself, always generous, kindly and supportive. When Barb expressed concerns about leaving the UK music scene to travel overseas in 1975, Phil reassured her by saying, "Don't worry, you can come back to it. You'll always be a musician." Though our respective musical styles diverged in the eighties, Barb and I continued to work with Phil; one notable collaboration was the magnificent 'Dada Soul', featuring another beautiful chiming guitar intro and an intriguing, developing chord sequence and melody line. Phil's wife Herm wrote the song lyrics, an affectionately quirky tribute to Richard Sinclair, who performed the song with his usual effortless, debonair charm while Barb and I did our bits and pieces in support. A fabulous composition, and a great way of bringing everyone together.

After our years treading the boards with Hatfield and National Health, Phil and I would occasionally meet in the West End, starting with a coffee in Ray's Jazz Shop above Foyle's and, following a leisurely stroll through Soho, a couple of pints at the Dog and Duck. We'd sit in the corner chuckling over old road stories (usually involving atrocities committed by Pip and/or Benj), comparing notes on new musical ventures and laughing at the sheer, ongoing hopelessness of the music business. Phil was always great company - I'm going to miss our catch-ups.

Our last meeting was in September 2017, when I dropped round to Phil and Herm's flat for a short visit. Phil was in remarkably good spirits, sitting up in bed in a nice warm room watching arts programmes on a large TV, comfortable, content, lucid (though a little tired), chatting and laughing as ever. He was at ease with his condition, saying if a cure was feasible he'd be happy to take it, but if not, he'd had a good life and felt there were others much worse off than him. He praised his local health team, and said he was lucky to have Herm taking care of him round the clock. It was clear to me that whatever happened, Phil was at peace with himself. Outside, leaves were beginning to fall in the streets, and I went away reflecting how fortunate I was to have had this big, warm-hearted man as a lifelong friend.

Comments are welcomed in the Visitors' Book

Return to top
All text, images and audio files on this website copyright of Broken Records, UK.
Please do not reprint, upload or share without permission. Thank you!